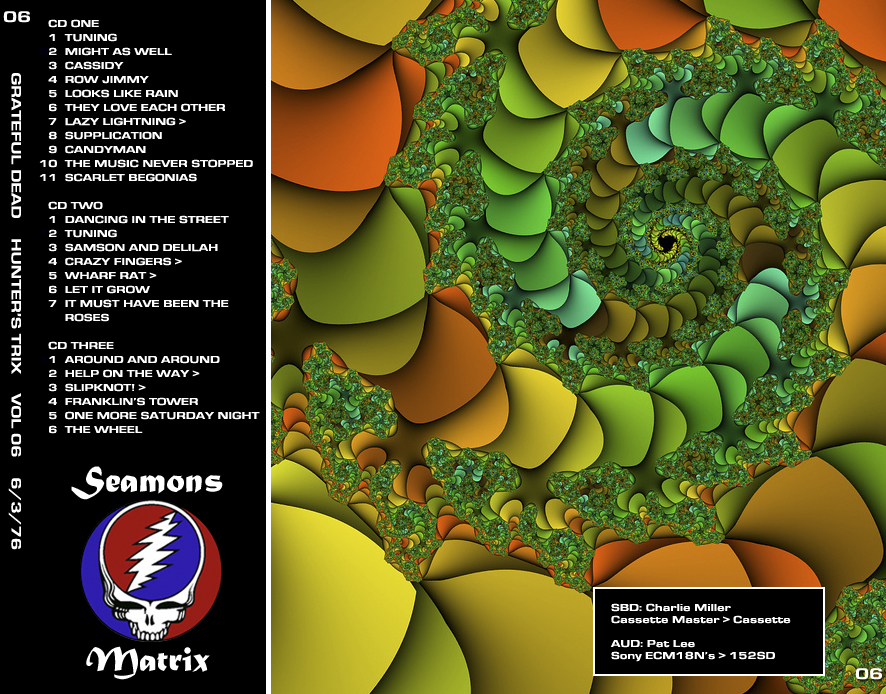 Might As Well, Cassidy, Row Jimmy, Looks Like Rain, They Love Each Other, Lazy Lightning, Supplication, Candyman, The Music Never Stopped, Scarlet Begonias, Dancin' In The Streets

Samson & Delilah, Crazy Fingers-> Wharf Rat-> Let It Grow-> Drums-> It Must Have Been The Roses-> Around & Around-> Help On The Way-> Slipknot!-> Franklin's Tower-> One More Saturday Night, E: The Wheel

Reviewer: SomeDarkHollow - favoritefavoritefavoritefavoritefavorite - October 12, 2016
Subject: Are you kidding me?
Ridiculous. The recording, like so many other from this year, is spot on and yet another great example of Hunter's skill. The show is fantastic and I especially like the H>S>F with the extended Slipknot being a masterclass in what made the Dead the Dead. Phil is rock solid and Keith lays down some stunning work in support of Jerry's typical mastery. Not like the explosive and thundering shows that were to come in the following year, this one takes its time, mellowing like an exceptional vintage, its color and flavor slowing growing and maturing. Hot damn, boys, well done.

Reviewer: illuminetics - favoritefavoritefavoritefavoritefavorite - June 20, 2014
Subject: My First Show!
This was my first Grateful Dead show. My brother took me when I was a Jr. in high school. After all these (38) years, I still treasure this night - and the 71 other shows that followed. I still have my June 3, 1976 ticket stub... $7.50! Thank you boyz for a real good time!
Randy J.

thanks for the rich, warm matrix, Hunter !

The boys come back, and they're H-O-T. This famed first show after the hiatus I have always loved in matrix form; Dr. Hunter S: is this an upgrade of your previous 'trix on this site? Whatever the case, it sounds absolutely *exquisite*. Thanks again.

A searing first set, with a triptych of tunes that has Bobby and Jerry more or less trying to top the other - Music Never Stopped, Scarlet, Dancin' - that Scarlet in particular sounds like it was carved right out of '77 and transplanted a year back in time...

That uber-funky Samson (check Phil, yo) and a prototype suite of tunes that, for my money, peaked in '76: Crazy Fingers > Rat > Let It Grow is your meal ticket...the rest of the second set, while continually well-played, has a bit of a disjointed feel - start-stop-start-stop...but right in the middle of that is a delirious H>S>F; that Slipknot just goes on and on!

Of course, there is the debate on '76's overall place in the Dead canon; I'm all about getting the word out, myself. I think there is some absolutely marvelous music to be found in this strange, restless, no-man's-land return year before they grabbed the solid ground in '77....what is left for us are some experiments in trying to *find that footing* that, in some strange, exciting ways, leave '77 out to dry. Yep.
Reviewer: GermanShepherd - favoritefavoritefavoritefavoritefavorite - April 30, 2013
Subject: Nice Matrix, Might As Well
Nice show recording. I am in love with these matrix mixes. So much better than AUD at the beginning of the track only. Might As Well, Lazy/Supplication, Samson, and the Wheel are all new at this show. What a treat. It seems there was some technology development during '75 which leads to better transfers or something - after their break, these recordings are sounding better and better.
Reviewer: Tidewater four ten O nine - favoritefavoritefavoritefavoritefavorite - February 27, 2013
Subject: Play it loud
A fine example of where the whole (the matrix) is greater than the sum of the individual parts (the SBD and the AUD). Great clarity of vocals and instruments from the SBD and just enough (often less is more) added spice from the AUD.

Aside to say: Play it loud - I like it when the glass rattles in the window frames and tiles start to fall off the roof.

Nice (understatement) work Hunter - up there with the Tobins !!!!!

Uploaded by Matthew Vernon on February 25, 2013